The Airborne Tactical Officer or “Observer” is responsible for the tactical employment of the aircraft, its sensors, communications systems and weapons. The Observer will operate all weapons and sensors, evaluate sensor information, perform tactical analysis and then employ the helicopter in the best way to accomplish the mission. As an Observer your primary roles will be mission planning and warfare and you will be expected to be an expert in both areas. At sea you will be briefing both ship’s Commanding Officer and the embarked flight on missions and the best way to employ the aircraft to ensure success.  When conducting warfare you can expect to take command of the battlespace as the Observer utilising all of the aircrafts sensors, communications systems and weapons to ensure optimal tactical employment of the aircraft.

On completion of Junior Officer Common Training, and Flight training you will be posted to 6 Squadron at RNZAF Base Auckland in Whenuapai. Whilst there your duties and responsibilities revolve around daily flying, consisting of operational flights and training flights, and administrative duties all Officer roles entail. You can expect to fly most days of the week in many different environments working with external agencies throughout New Zealand.

Naval Aviation is an integral part of any Ship’s deployed capability and for any significant deployment of an aviation capable Ship, a SH-2G(I) can be expected to deploy. The role of the  SH-2G(I) on board a RNZN Ship varies from being the primary weapons system on an ANZAC class Frigate conducting Warfare roles and Airborne Use of Force, to resupplying an island off the coast of New Zealand in support other Government Agencies.

A Ship's flight crew usually consists of eight RNZAF technicians, the Pilot, the Observer and a Helicopter Loadmaster. Your role as the Observer is to operate all of the SH-2G(I) systems and to employ your tactical and warfare knowledge to achieve the mission. You will work alongside the pilot providing guidance and tactical information to ensure that the aircraft is positioned correctly and is operated as required for the mission. On board the Ship, you will have duties to conduct, such as advising the Commanding Officer on all aviation matters, conducting Meteorological briefs and training the Ships Company in Aviation procedures.

Once you complete the Junior Officer Common Training you will conduct Observer training at RNZAF Base Ohakea in the Manawatu, on completion of basic Observer training you can expect to return to Auckland to conduct conversion on to the SH-2G(I). Once fully qualified on the SH-2G(I) Helicopter, you can expect to fly as core member of a flight gaining experience ashore and embarked on RNZN Ships. Once you have gained sufficient experience as both an Observer and Naval Officer you will advance to the role of Flight Commander. This role means you will be responsible for all aspects of the Ship's helicopter operations.

Once you are suitably experienced you can also expect to conduct instructor training either down in Ohakea or at 6 Squadron. At Ohakea as an instructor you would be instructing Aviation Warfare Officer Course (AWO) which is a combined Air Force and Navy course teaching the basic principles of the trade. At 6 Squadron as an instructor you will be teaching students on Aircraft Conversion Course and Operational Conversion Course how to fly and how to effectively employ the SH-2G(I)

Additionally, there is the potential for deployment as an Officer to any one of the numerous overseas operations the Defence Force is committed to.

After JOCT you will join Royal New Zealand Airforce trainees at RNZAF Base Ohakea, where you'll spend 12 months flying the Beechcraft KA-350 Super King Air. Here you’ll kick-start your naval aviation career and learn what it takes to be an airborne mission commander, honing your skills in low level visual navigation and high altitude instrument and systems navigation. Once you’ve mastered these skills you’ll move on to the tactical phase of flying, learning how to employ the aircraft in an operational maritime environment.

On completion of your training in Ohakea you will graduate as an Observer, gaining your wings and returning to RNZAF Base Auckland. Here you will join the naval aviation community at 6 Squadron and undertake conversion courses onto the Seasprite helicopter. The Aircraft Conversion Course (ACC) takes Seasprite operators through the aircraft systems, general handling and emergencies, instrument flying, navigation, utility, search and rescue and mission command. This is then followed by the Operational Conversion Course (OCC) which covers the embarked and tactical employment of the aircraft. These courses are taught in both the Seasprite helicopter and in the full-motion simulator. Course duration is flexible however it usually takes one year for both courses. The latter part of the OCC includes an embarked phase on an RNZN ship under the supervision of an Observer instructor. Along the way you’ll also undertake additional courses including survival, escape and evasion procedures and first aid that are essential for all aircrew trades.

As an Observer you will always be expected to be at the top of your game. To ensure that you are capable of delivering on this the RNZN and RNZAF will continuously train and develop your skills. This involves everything from continuation and consolidation in the aircraft and simulator to annual currency checks and assessments.

Observers have a range of specialisation options open to them on completion of core trade qualifications. These can include courses such as the Helicopter Warfare Instructor course which increases your specialist knowledge of aviation warfare and the teaching of these principles and skills to junior Observers.

There is also the potential for out-of-trade deployments to any one of the numerous overseas operations that the NZDF is committed to.

Careers in the Navy are well-rewarded, diverse and exciting. As you become more experienced and move up through the ranks, gaining additional skills and qualifications, your salary will rise accordingly.

For example, on top of your basic salary you can expect 'Military Factor'. This provides you with significant extra financial rewards because of the commitment you've made to serve your country.

You must be at least 17 years of age.

You must have achieved NCEA level 2 with a minimum of 18 credits each in level 2 English, Mathematics and a Science.

You must be medically fit for service. Colour perception restrictions may apply. Height limits will apply with the introduction of new or upgraded training aircraft. Individuals will be assessed for height limits as part of the application process.

There are strict citizenship and security requirementsto gain TSV security clearance for this trade.

You must also be free of any criminal convictions.

Your training is some of the most thorough and advanced in the world. On completion of your training, you will be contractually obliged to carry out a return of service to the Navy for 10 years. 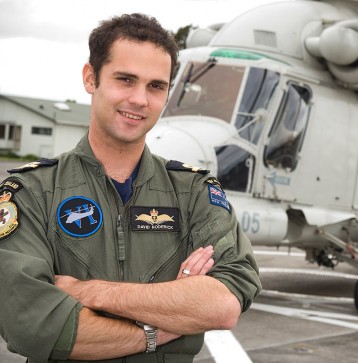 Navy | Navigation, Combat and Security
Back to top